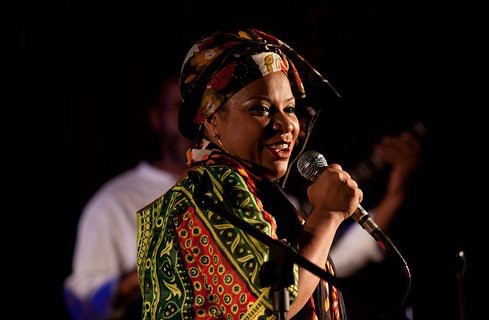 “Suleiman’s music brings the knowledge and culture of her people to the forefront: whether in the traditional costumes that she prepares for live shows, or through interwoven proverbs and stories of older generations—as if time itself is shifting throughout her tunes.” – Brendan Arnott, Vice.

Mim Suleiman looks to her East African heritage to delight her listeners with the vibrant, harmonious sounds of her culture. In an exciting and boundary-crossing unification of classic afro-beat grooves, electronic, disco, house and soul, Mim engages audiences with an enticing ease.

Her, largely Swahili, tunes are profoundly communicative, even for those who cannot understand the language. She says:

Before I spoke English, what stood out about the music from other cultures was the impact of the voice. The emotion contained in melody… it moved me deeply, even if I didn’t know the lyrics.

Now, Mim Suleiman has mastered this sentiment and become a pioneer within her genre, skilfully sharing the songs and tales of her heritage, through her unique style, to one and all.

Having moved to Birmingham from Zanzibar as a lecturer in metallurgy, Mim Suleiman’s words on how she found her passion for music are inspiring:

What was once as a person of no art has become now an artist within fifteen years… it’s given me a depth of life I’ve never had before.

Within those years, she created no less than five albums and has played locations all around Europe, Africa and Asia. Mim has showcased her talents widely, and to a range of audiences, from performances in Tasmania to Buckingham Palace. One of Mim’s songs, ‘Mingi’, also features popularly on Grand Theft Auto V.

Now Sheffield based, Mim works on collaborative projects with other jazz and soul musicians. She is also a sought-after workshop leader, conducting motivational classes for people of all ages, which include direction on song, dance, harmonies and performance. She has conducted these workshops throughout the UK and abroad.