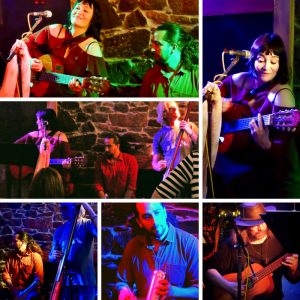 Valentina and Voces del Sur features wonderful Chilean exile singer Valentina Montoya Martínez and Scottish virtuoso guitarist David A Russell. Valentina is Chile’s leading female folk & tango singer in the UK, a singer-songwriter with a passion for Latin American roots music and culture. Her aim is to disseminate folk traditions from her native Chile and Latin America, to tell her own stories and those of her people and their ancestors.

Her band has toured widely, with concerts throughout the UK, as well as in Chile, Greece and Portugal, and continues to record & release live & studio albums, whilst Valentina also performs & records with tango ensemble Mr McFall’s Chamber, as well as writing & publishing her poetry & short stories.