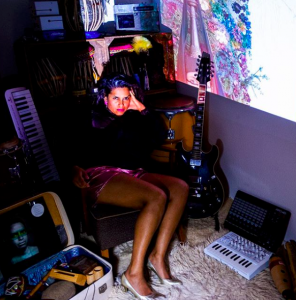 Operating within electronic, Indian Classical, Latin, Pop and Rock music, Bengali-British percussionist, Renu, commenced her musical journey in 2000, collaborating with bands on the Asian Underground electronic scene and with artists like Grace Jones, State of Bengal and Fun_da_mental, to name just a small selection. Her achievements include travelling the world, playing with her band Renu & The Revellers at venues such as Royal Festival Hall, Queen Elizabeth Hall and The Great Escape Festival.

Renu’s quest to master percussion has seen her travelling the world solo, learning the Tabla on visits to India, Latin percussion in Cuba, candomble in Brazil and Flamenco in Spain.

In 2010 Renu began to produce her own music and, within the space of a year, her appetite for creating music saw Renu working to release her debut album, ‘Love from London’ (2011) to critical acclaim, followed by a second album, ‘Midnight Radio’ (2012). Her sound is an alluring and eclectic mix of the traditional and the electric, spanning genres to create something sonically unique

Now, Renu moves between London and Berlin and has most recently toured with ‘They Dance in the Dark’ in 2017-18, for which the first single, ‘Always You’, was released in June 2017. The album is bold and individual, largely referencing 80s and 90s electronic dance music. Renu produced it ‘mainly through the computer and the philosophy of playing Tablas in mind: creating big and infinite sounds with a minimum set up.’

In March 2020, Renu released ‘The Happening’, an album of ten songs composed in ten days, which she describes as, ‘Pensive, cinematic and orphic.’ In her work, Renu has engaged in successful collaborations with artists like Sarah Yaseen, Skopje and Dear Pariah, who features on ‘The Happening.’