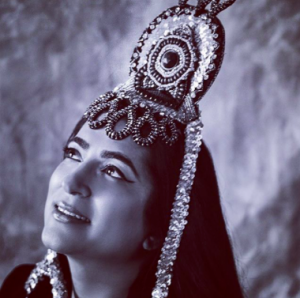 ‘The congregation listened in rapt silence to Dasgupta’s mellifluous rendering of Raghupati Raghava Raja Ram. Her singing floated through the Westminster Abbey whose stained glass windows were lit up brightly on a sunny morning…” The Telegraph, India

Versatile Indian vocalist, Unnati – Hindi for ‘prosperity’ – delights her audiences with soulful performances of her unique blend of global music.

Unnati’s music reflects her British-Indian heritage, in a crossover of the sounds of Indian classical, pop, jazz, Sufi and Bhajan music. Inspired by music, spirituality and nature, Unnati describes her taste as ‘eclectic’ and often performs English pop songs with an Indian twist. Of her music, she says, “I’ve grown into being a professional artist and realised the gift that music brings to my life. It’s incredibly healing for me to sing and perform.”

Unnati credits her musical versatility to her upbringing. Born in London to a Bengali Indian Classical vocalist mentor and father, there is a keen sense of Unnati’s heritage in her work. Having first performed  in front of thousands at the Hare Krishna Mandir for Janmashtami at the age of four, the accomplished singer is a natural on stage.

In her own words, Unnati seeks to “create her own International mainstream sound which is not of one distinct genre.” Her first album, ‘Vishwa- The Universe of Music’, made with her sister Preeti, was released in India, where they enjoyed a successful six-city tour. In 2019, the Indo-Jazz singer released ‘Indigo Soul’, her debut solo album. It is a transcendent and evocative outpouring of Sufi and jazz tunes in Unnati’s distinct style.

Unnati is a 2005 Glastonbury Unsigned Artistes Jazz World finalist and has performed at prestigious venues around the world, including The Royal Albert Hall, Southbank Centre, Cadogan Hall and a number of festivals in Mexico, the Caribbean and Mumbai. She was also chosen by the Attenborough family to perform at a private memorial service for Sir Richard Attenborough, and her voice featured in a sound installation at the V&A in 2017.